The Hunt: Recording a Hail Cannon 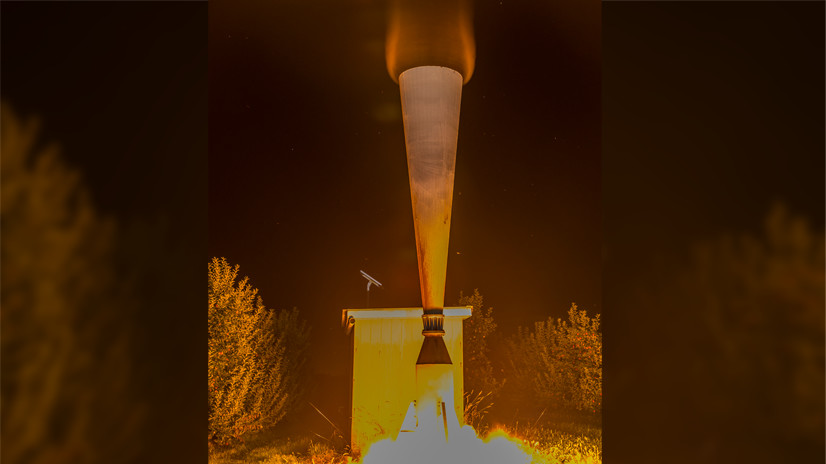 The following is a repost of a blog I wrote for A Sound Effect for my Combustion library:

It all started with a “boom”.

I was standing in an orchard with a man I just met when it hit me (the shock wave, that is). The hail cannon fired and I could have sworn I got punched in the chest. I knew it was going to be loud. Over the course of a couple of years, I had looked up videos and tracked down various hail cannon owners. I made countless phone calls and sent dozens of emails trying to get permission to record one. Some didn’t respond. Some no longer had them. Most explained they will absolutely not fire it unless the forecast calls for a serious hail storm. Apparently neighbors, even those miles away, really don’t like the sound of a ~25 foot cannon firing every 5 seconds.

Finally, I got a reply to one of the many sent emails that simply said:

I’m sure we can work something out. Let me know when you want to come down.

Of course I jumped right on this and we arranged a day for me to come out to record.

I originally was looking for cannons near by, but eventually widened my search to across the country. Recording this hail cannon meant a ~10 hour drive there and back. It was certainly the biggest distance I had to travel exclusively to record something, but I didn’t mind. After all the time and effort I put in to tracking these cannons down, I probably would’ve flown across the world to record one if it came to it.

When I finally arrived at the location I was greeted by my friendly contact and we quickly made our way to the hail cannon in his truck. I let him know it’d be 10 minutes or so while I set up my gear.

First I set up my trusty Sennheiser MKH 8040’s. They were in a Rycote Cyclone in XY format about 20 feet away. Right next to that, I planted an Earthworks TC30, which is specifically made for loud sound sources and also records down to 9Hz! Being that it’s an omnidirectional mic, I figured it be nice for capturing all of the various reflections from the surrounding trees and buildings. I then went another ~15 feet away from the cannon and pointed a Schoeps CMIT 5U shotgun up in the sky above the cannon. After all, the thing that makes a hail cannon so unique is the invisible vortex rings it sends up in the sky. These rings rip, whistle, and roar upwards through the sky making a one of a kind sound. It’d be a shame not to dedicate a mic to them! Lastly, I set a Sony PCM D100 on the ground about 10 feet away from the cannon as an experiment/alt perspective.

After I connected everything to my Sound Devices 744t, I gave the go ahead to fire the cannon. An announcement was made over the radio to warn everyone of the event. As I stared nervously at my recorder hoping I’d got the levels right I heard “FIRE IN THE HOLE!” and then…

I don’t think I can make that text big enough or emphasize quite how incredibly impactful the first shot was for me. It quite literally felt like someone with a gigantic fist punched me right in the chest and instantly pulled away. As the shots continued to fire I got accustomed to the initial impact and started to notice the little things. With each explosion I felt my hair get jolted back. I saw the leaves on trees and grass blades jump from the shock waves. I noticed my vision would be distorted for a split second as the pulses of pressure passed through my head.

After maybe 6 shots of just enjoying the moment, I snapped back to focusing on my recorder and critically listening to the mics. To my surprise, my levels were pretty much right on point… just a couple small tweaks. When monitoring the “sky” microphone, I was surprised the vortex rings weren’t quite whistling; more just roaring. Then I remembered the owner told me it would take a good 12-15 shots before it warmed up and ran at 100%.

Right on cue, around the 15th blast, I heard the vortex rings really start to rip and whistle into the sky. It was a moment of pure joy. After seeing so many videos of them, I finally was there to witness and capture the incredible sounds in person. I wish I had a camera pointed at me because I’m sure I had my mouth open the remain shots, only to be closed when the owner waved at me to signal whether we should stop. I had told him a couple of minutes would be more than enough, but lost track of time in my trance and realized we had already been firing for over three minutes. I knew how much potential disruption this could cause the surrounding area so I quickly waved back for him to stop, and the final few blasts rang out as my long envisioned journey came to an end.

Three minutes and thirty seconds. I drove 10 hours for a three and a half-minute recording, and it was completely worth it. Nevertheless, it was still an odd feeling for it to be over so soon. I spent another half hour or so hanging out and chatting with staff who were interested in what I was doing, and then was back on the 10 hour (but totally worth it) drive home.