View cart “MaK – Mouse & Keyboard” has been added to your cart.

MaK is a Kontakt instrument which allows you to quickly perform the foley for various computer keyboards, mice, and touchscreen devices.

MaK is a Kontakt instrument which replicates the sounds of a person using various computer keyboards, mice, or touchscreen devices. This allows you to very quickly perform the foley of using one of these devices via midi.

MaK was created to speed up the time consuming process of editing and/or recording mice and keyboards. After realizing how often this came up in both my commercial and film work, I decided there had to be a better way.

There are 15 devices available in MaK: 5 Keyboards, 5 Mice, 2 Touchscreens, and 3 digital keyboards. Each of these devices has been meticulously recorded at a number of different velocities for a very realistic playback performance.

The majority of the devices have 5 velocity layers; from soft to hard. Each of these velocity layers have 32 different samples: 16 for the press sound, and 16 for the release sounds of each device. That’s 160 samples per device! MaK will randomly trigger press and release samples for each layer based on the velocity you play the notes. Easy to use controls allow you to adjust additional layers of randomness in both velocity and pitch. All of this adds up to realistic devices, and convincing performance.

MaK will NOT work in the free Kontakt “Player”. A full, licensed version of Kontakt 5 (5.3.1+) is required. 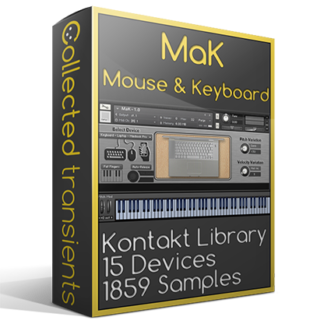